Your system is running on Linux with multiple physical network interface cards (NIC) and each card has its own default gateway. By default, you can only set up a single default gateway on a system.

In our example, we will consider 2 NICs (eth0 and eth1) enabled with default gateway configured on eth0 interface. 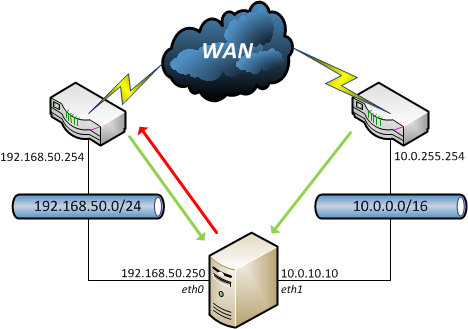 On this scheme, we can imagine two different cases:

In the first case, there is no problem, each NIC will work independently but in the second case, if you configured default gateway on eth0, whatever the network card receiving the request, it will answer through eth0 which is the default gateway.

The solution will be to use a program called iproute2, which is included and installed in all current Linux distributions. The expected result is: 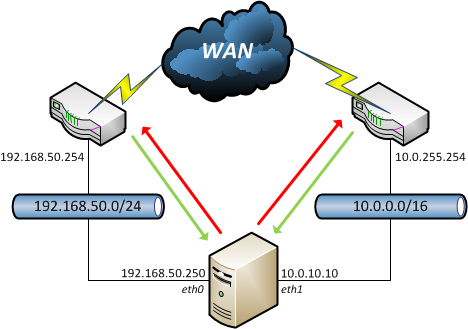 First of all, you will have to define new routing tables in the file /etc/iproute2/rt_tables by defining your own tables. Here, we are defining two new tables called rt0 and rt1:

Afterwards, you will have to configure your network cards (under /etc/network/interfaces if you’re running on a Debian-like system) as below:

And now, restart your networking service to set this new configuration up. This will be permanent.

You can now connect to your server using both interfaces, and it will automatically answer correctly through the good gateway !